We are proud to announce the launch of the CBTA! This new Canadian beach tennis governing body has a mission to be a progressive and diverse organization focussed on promoting the sport of beach tennis in Canada. 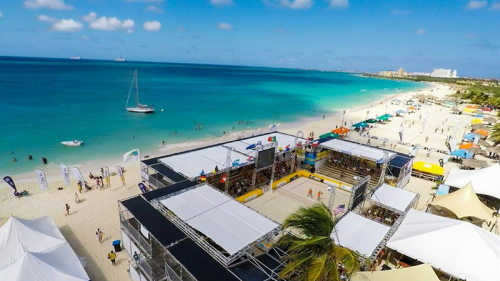 Welcome to Beach Tennis, the fastest growing sport in the world. It is played in over 74 countries and nations worldwide with tournaments held nearly every weekend.

History
Beach Tennis originates back to the 1960s in Italy, specifically the Adriatic coast near Ravenna. In 2005, Beachtennis made its way to the mainland of the United States with groups setting up from coast to coast. A tour was launched the first year, drawing in many ex-tennis players in the early days. More recently, we are seeing a large number of younger players taking up the sport. Now, with the support of the International Tennis Federation, the sport is growing leaps and bounds.

Beach tennis made its way to Canada, starting in 2017. It is easy to pick up and fun to learn and has been growing quickly. With our new governing body and the support of Tennis Canada, we are excited to work in collaboration across the country to see where we can take this exciting sport.

Similar to Tennis, a game is scored 15-30-40-game. When it comes to 40-40, a sudden death point is played.
Players take turns serving a game until one team wins. Typically players play a set which is the first team to win six games.
The ball is hit once before being returned over the net to the opposing team
You serve once per point. The ball can hit the net legally only if it lands in bounds on the other side
The ball cannot hit the sand or the point is lost.

The CBTA Board of Directors 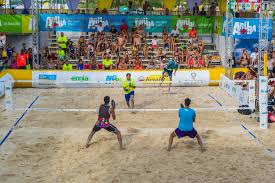 The Canadian Beach Tennis Association was established in 2020 to begin structuring and formalizing the sport of Beach Tennis.  The board is composed of players, organizers and business professionals, all of whom share the same interest and goals of taking Beach Tennis to the next level in Canada.

Marty Salokas, Co-president: Based out of Montreal, Marty is a former top 25 player in the world, #1 player from the United States and “Godfather” of beach tennis in North America. He is responsible for building and creating the first permanent courts in the USA and Mexico. He has hosted over 20 events, both locally and internationally and is the emcee for the largest beach tennis tournament in the world, the Aruba Beach Tennis Open. Marty brings years of knowledge and experience to the CBTA, having been involved in the sport since 2005,  and has goals of creating the National Team for both adults and juniors.

Noah Goldstein, Co-president: Based out of Toronto, Noah has helped create one of the fastest growing beach tennis clubs in the world and has directed Toronto’s first IFBT tournaments. Coming from an ultimate frisbee background, Noah has captained nationals level teams and is looking forward to building excitement that surrounds such a growing sport. With an actuarial background and not for profit Board experience, his business acumen and knowledge will help guide the growth of the CBTA.

Roman Manastyrski, Treasurer: Roman is also the president of the Toronto Beach Tennis Club and is the the CBTA East region head. In his past, Roman has participated in various provincial, regional and international competitions in football, table tennis, handball and ice-hockey. After discovering beach tennis in November 2017 on the beautiful Eagle beach in Aruba, he fell in love with the sport. Roman’s work background is at a Canadian bank. His experience, knowledge and enthusiasm will be a valuable asset in growing the sport in Canada.

Ana Archer, Operations Manager: Ana was born in a Portuguese family of basketball athletes. Ana grew up navigating between being a player, coach and referee, and volunteering in international CLINIC events. In 2017, she was introduced to Beach Tennis when in Rio de Janeiro. Her passion for the sport was immediate and when she returned to Toronto, her goal was to find and grow this sport. Ana owns and manages 3 businesses in Toronto and has experience with not for profit organizations previously as Associate Director Strategic Partnerships for Save the Water, and Director of Strategic Operations for Artbound. Her experience in the sports industry and not for profits will be a valuable asset for the growth of Beach Tennis in Toronto and Canada.

Glenn Neven, Quebec regional head: Glenn discovered beach tennis in Italy, came home to Montreal and founded the first Canadian beach tennis group which has grown in size and talent under his guidance. He also organized the first 2 ITF & IFBT events in Canada. Glenn has played beach tennis wherever and whenever he can, including in California, Florida, New York, Aruba, Italy, Spain and Mexico. Glenn’s passion for the sport is apparent to everyone who meets him and will serve the CBTA well as we spread this passion coast to coast.

Chris Morisseau, West regional head: After discovering beach tennis in 2017 in San Maarten, Chris has helped to grow the beach tennis community in Vancouver, BC.  With more than 180 members, Ambleside Beach in West Vancouver is now the home of beach tennis in Western Canada. Events, league, new player sessions, tournaments, youth programs, partnerships with local tennis clubs & community centres, and teaching lessons are some of the many initiatives Vancouver Beach tennis community members are proud to be part of.

Claude Gobeil is a former women’s Quebec national hockey coach and an avid tennis player. He has been implicated in elite sports for a long time. He started to play beach tennis in Aruba and he wants to be an ambassador of the sport in Canada. He is determined to organize tournaments and put in place a national training center. He is excited to be directing a big new tournament planned for Sherbrooke.

Barry Goldlist: Barry is focussing on sponsorships and other revenue generation. Barry has played racquet sports all his life. He recently retired from ultimate frisbee after 26 years of local, provincial, national, and international tournaments, the pinnacle being a Silver medal representing Canada in 2018. He has sat on many levels of Boards and Committees for Ultimate, as well as managing a Semi-pro Canadian Soccer team for 3 years in the 1990’s and is now hooked on Beach Tennis. His wide and varied business experience and success is a valuable asset to the growth of beach tennis in Toronto and across Canada.